The Law of Wreck 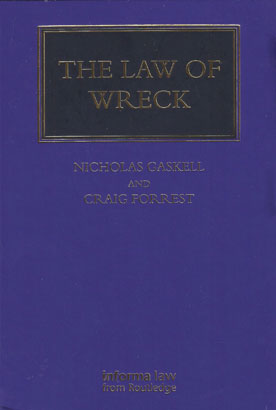 This book covers wreck law as an integrated whole, going beyond the question of "removal" to include issues such as the ownership of wreck and how the law deals with the many commercial law problems arising after ships have been wrecked during the maritime commercial adventure.

The book offers authoritative guidance on the genesis and meaning of the Nairobi Wreck Removal Convention 2007, and the interpretation of its often-complex provisions as they apply both to States trying to use its powers and to shipowners and liability insurers faced by its obligations.

The authors explain the increasingly complex inter-relationship between linked areas of maritime law, including salvage, intervention and the overlapping international regimes which deal with pollution from oil, bunkers or hazardous and noxious substances.

The book examines how a salvage operation transitions to wreck removal and links the liability provisions with the standard form international commercial contracts actually used by the industry to remove wrecks, eg BIMCO’s Wreckstage 2010, Wreckhire 2010 and Wreckfixed 2010. It also covers the complex requirements concerning the disposal of wrecks, including the latest recycling regulations applicable in 2019.

The Law of Wreck will be of value to shipping industry professionals, insurers and legal practitioners, as well as academics and students of maritime law.

Cartner on the International Law of the Shipmaster 2nd ed
John A. C. Cartner
ISBN 9781138780408
To be published January 2021
Informa Law from Routledge

The Law of Yachts and Yachting
Filippo Lorenzon, Richard Coles
ISBN 9781843118886
Published August 2012
Informa Law from Routledge
Out of print