This book is now Out of Print.
A new edition was published, see:
The Private Competition Enforcement Review 9th ed isbn 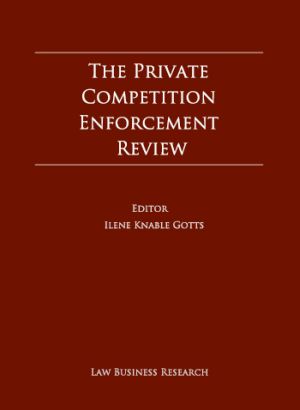 
Private competition litigation can be an important complement to public enforcement in the achievement of compliance with the competition laws. For example, antitrust litigation has been a key component of the antitrust regime for decades in the United States. The US litigation system is highly developed – using extensive discovery, pleadings and motions, use of experts, and, in a small number of matters, trials, to resolve the rights of the parties. Arbitration and mediation are still rare, but not unheard of, in antitrust disputes. Congress and the US Supreme Court have attempted to curtail some of the more frivolous litigation and class actions by adopting tougher standards and ensuring that follow-on litigation exposure does not discourage wrongdoers from seeking amnesty.

Private antitrust litigation is largely a work in progress in many parts of the world. Change occurs slowly in some jurisdictions, but clearly the direction is favourable to the recognition that private antitrust enforcement has a role to play. Many of the issues raised in this book, such as the pass-on defence and the standing of indirect purchasers, remain unresolved by the courts in many countries and our authors have provided their views regarding how these issues are likely to be clarified. Also unresolved in some jurisdictions is the availability of information obtained by the competition authorities during a cartel investigation, both from a leniency recipient and a party convicted of the offence. Other issues, such as privilege, are subject to change both through proposed legislative changes as well as court determinations. The one constant across all jurisdictions is the upward trend in cartel enforcement activity, which is likely to be a continuous source for private litigation in the future.