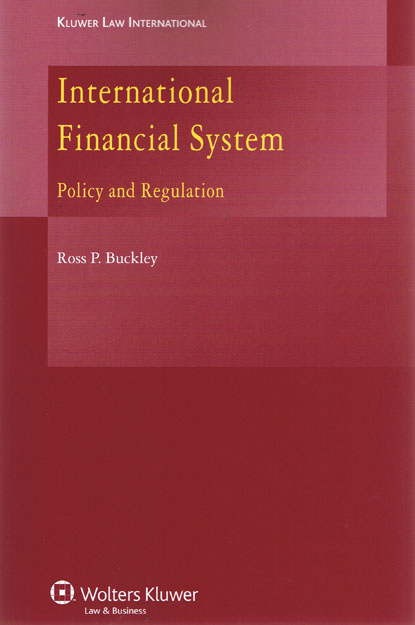 History has a way of repeating itself in financial matters because of a kind of sophisticated stupidity, John Kenneth Galbraith once wrote. In this superb new book, Ross Buckley suggests that the stupidity identified by Galbraith can be traced to the persistence of an inadequate legal system for the regulation of international finance − a system rooted in the failure of economists and investors to take the legal demands of real-world finance seriously.

Everywhere, trade is glorified while finance tends to be taken for granted. Yet financial flows far exceed trade flows, by a factor of over sixty to one; international financial transactions represent a far greater proportion of the practice of most major law firms than do trade transactions; and international finance, when it goes wrong, brings appalling suffering to the poorest citizens of poor countries.

In a powerful demonstration of how we can learn from history, Professor Buckley provides deep analyses of some of the devastating financial crises of the last quarter-century. He shows how such factors as the origins and destinations of loans, bank behaviour, bad timing, ignorance of history, trade regimes, capital flight, and corruption coalesce under certain circumstances to trigger a financial crash. He then offers well-thought out legal measures to regulate these factors in a way that can prevent the worst from happening and more adequately protect the interests of vulnerable parties and victims.

In the course of the discussion he covers such topics as the following:-

Professor Buckley’s far-reaching recommendations include details of tax, regulatory, banking, and bankruptcy regimes to be instituted at a global level.

As a general introduction to the international financial system and its regulation; as a powerful critique of the current system’s imperfections; and most of all as a viable overarching scheme for an international finance law framework soundly based on what history has taught us, International Financial System: Policy and Regulation shows the way to amending a system that repeatedly sacrifices the lives of thousands and compromises the future of millions.