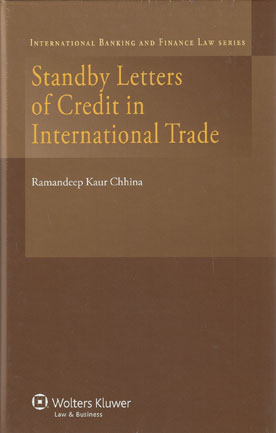 The question of what constitutes ‘fraud in the transaction’ with respect to international letters of credit varies considerably among jurisdictions.

In proving allegations of fraud, it is crucial for the practitioner to know the relevant jurisdiction’s case law, especially if wider defences such as inducement, unconscionable conduct or bad faith must be invoked. In this book, the author argues that, whereas ‘fraud in the documents’ is generally sufficient in cases involving commercial letters of credit, standby letters of credit demand a wider fraud exception.

The central issue – how wide that fraud exception should be – is what this book explores in depth.This author compares and critically examines the application of the fraud exception in four major trade jurisdictions – the United States, England, Canada, and Australia. With an overall focus on how each jurisdiction’s fraud tests treat the autonomy of standby letters of credit, she builds her arguments on such relevant sources and concepts as the following:

The presentation includes detailed summaries and analyses of leading cases in all four jurisdictions.

Lawyers and corporate counsel responsible for arguing claims or defences in letter of credit transactions will welcome the way the author's research and insight define the range of options in each case they handle. Academics also will appreciate the systematic way the book frames a complex area of international trade law.