Financial Regulation at the Crossroads: Implications for Supervision, Institutional Design and Trade 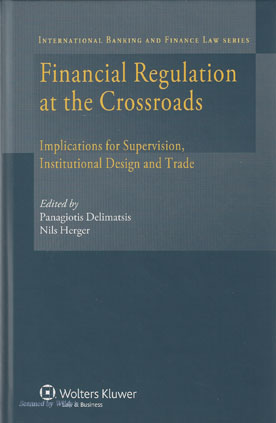 To gain from trade, modern economies rely on a stable financial system. In many countries around the world, the benefits of finance are taken for granted. Financial stability comes to the forefront only in times of crisis.

The global financial crisis of 2008 and 2009 exposed some of the regulatory and market failures of a more and more globally organized financial system and led to far-reaching discussions about a broad range of academic and policy issues on the regulation of financial services.

Against this background, this edited volume brings outstanding expertise and provides insightful perspectives from nineteen authors with diverse backgrounds, including officials from international organizations, national regulators, and commercial banking, as well as academics in law, economics, political economy, and finance.

The authors not only shed light on the causes of the financial turmoil, but also present thoughtful proposals that contribute to the future policy debate, and discuss opportunities that financial services can offer in funding activities which raise standards of living through initiatives in microfinance, renewable energy, and food distribution.

The contributions to this volume tackle several of the thorniest issues of financial regulation in a post-crisis environment, such as:-

While the debate about regulatory reform has just begun and will inevitably be characterized by controversies, it will be vital to appreciate the interconnected nature of the financial system. Without effective coordination of regulatory responses to financial crises, tackling the pressing challenge to limit cross-border contagion in times of crisis without jeopardizing the benefits of financial globalization is almost certainly doomed to failure.

The Derivatives Revolution: A Trapped Innovation and a Blueprint for Regulatory Reform
Raffaele Scalcione
ISBN 9789041134301
Published May 2011
Kluwer Law International
£126.00