This book is now Out of Print.
A new edition has been published, the details can be seen here:
Globalization and Animal Law: Comparative Law, International Law and International Trade 2nd ed isbn 9789041158741 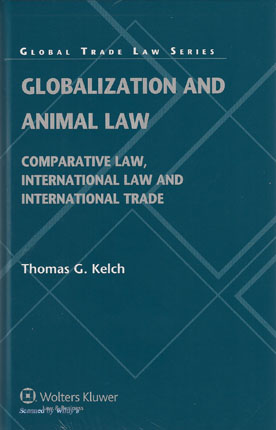 
The rise of the globalized economy has rendered an even more profound change in the relationship between humans and other animals than the ancient progression from hunter-gatherer to agricultural society.

In today’s global markets, multinational corporations exploit the economic value of animals throughout the world on an unprecedented scale. Many humans today do not even make their own choices about what they eat and buy; those choices are made by the global marketing machine that “packages” their food and the other products they purchase.

The philosophical and legal notions that animals are mere unfeeling machines or pieces of property, although more or less taken for granted for centuries, has been challenged in recent decades (in law, moral philosophy, and cognitive and other sciences), and regulation of the treatment of animals in agriculture, experimentation, and entertainment has begun to make substantial inroads in national and international law.

To a large extent this new found awareness comes from the moral repugnance we often experience as we learn the facts of modern food production, experimentation and entertainment practices involving animals – facts the popular media seldom mention. This book provides the first analysis of international and comparative animal law which focuses on the impact of today’s globalized economy on animal law.

Describing a wide range of individual domestic and international laws relating to the treatment of animals, the author clearly explicates the kinds of rules which affect the global animal marketplace. Representative norms in existing animal protection laws are analyzed and critiqued, along with laws that are illustrative of diverse approaches taken by different countries and by the international community to regulate the uses of animals.