Remission and Repayment of Customs Duties in the EU 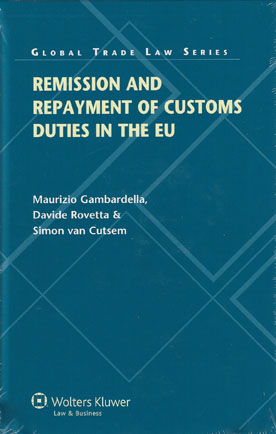 Despite the fact that business representatives need to be familiar with EU customs law and that authorities face hundreds of cases of remission and repayment on a daily basis, until now there has been no book explaining how these procedures work.

There is also a need for detailed knowledge of the variety of situations with regard to remission and repayment which are not covered in the legislation but in the jurisprudence of the Court of Justice of the European Union. This authoritative analysis by three leading practitioners in this complex area of law clearly describes what procedures to follow, what legislation to rely upon, and how to effectively invoke the case law on remission and repayment created by the Court of Justice.

In great detail the authors explain the administrative procedure before the customs authorities and the European Commission, and also describe the possible judicial phase before national courts and the Court of Justice. They provide an overview of how the consolidated body of EU customs legislation and case law is interpreted in different EU countries, with in-depth focus on the particular remission and repayment procedures – from initial request to appeal – in three different jurisdictions.

All of the following elements and much more are covered:-

The numerous lawyers, advisors, agents, and others who will greatly appreciate this book include EU and third-country trade lawyers and agents, compliance managers of export-import companies, officials of EU Member States and of international organizations dealing with customs issues, and traders and authorities of third countries that export goods to EU Member States. All will find here a constant resource that can be relied upon to answer virtually any pertinent question likely to arise.