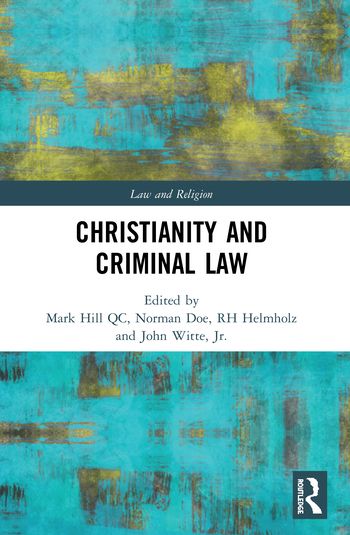 This collection, by leading legal scholars, judges and practitioners, together with theologians and church historians, presents historical, theological, philosophical and legal perspectives on Christianity and criminal law.

Following a Preface by Lord Judge, formerly Lord Chief Justice of England and Wales, and an introductory chapter, the book is divided into four thematic sections. Part I addresses the historical contributions of Christianity to criminal law drawing on biblical sources, early church fathers and canonists, as far as the Enlightenment. Part II, titled Christianity and the principles of criminal law, compares crime and sin, examines concepts of mens rea and intention, and considers the virtue of due process within criminal justice. Part III looks at Christianity and criminal offences, considering their Christian origins and continuing relevance for several basic crimes that every legal system prohibits. Finally, in Part IV, the authors consider Christianity and the enforcement of criminal law, looking at defences, punishment and forgiveness.

The book will be an invaluable resource for students and academics working in the areas of Law and Religion, Legal Philosophy and Theology.

Democracy, Religion, and Commerce: Private Markets and the Public Regulation of Religion
Kathleen Flake, Nathan B. Oman
ISBN 9781032313436
To be published March 2023
Routledge
£120.00