Religious Expression in the Workplace and the Contested Role of Law 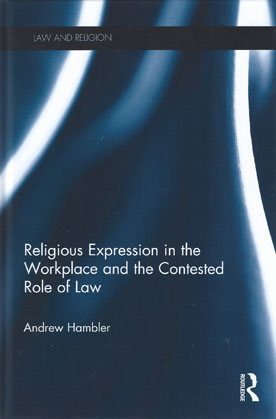 The role of religion in various domains of the public sphere provokes much debate. One of the key areas where this debate is unfolding is in the secular workplace, where some employees strongly desire to express their religious beliefs in ways which may bring them into conflict with their employers.

For example, a Sikh woman may wish to wear a kara bracelet contrary to an employer's uniform policy; or a Muslim may wish to take time out of required working hours for Friday prayers. Equally, some employees may feel compelled to object to particular aspects of their job role from which a crisis of conscience arises.

For instance, a Christian registrar might object to registering a same-sex marriage or civil partnership; or a Muslim retail worker might object to handling alcohol. This addresses these conflicts and the role of law in resolving them. It considers what is meant by religious expression by individual employees, and the motives underlying it, and sets out the different ways it might have an impact on the workplace, in both uncontroversial and potentially controversial ways.

The book identifies different principled responses to workplace religious expression within a liberal state. It then goes on to analyse to what extent the law in England and Wales reflects these differing responses, both at a legislative and policy level, and at a court and tribunal level.

The book determines the extent to which freedom of religious expression for the individual enjoys legal protection in the workplace in England and Wales, and whether or not there is a case for changing the law to strengthen that protection.