A Guide to International Disarmament Law 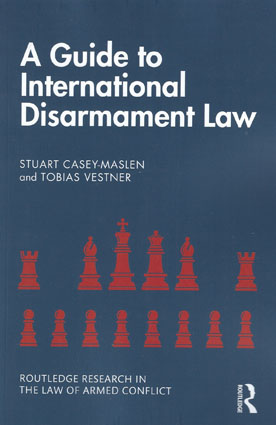 Disarmament is integral to the safeguarding and promotion of security, development, and human rights. Hundreds of millions of dollars are spent each year on disarmament operations, yet no comprehensive guide exists to explain clearly the international rules governing disarmament.

Traditionally, disarmament focused on weapons of mass destruction. This remains a critically important area of work. In recent decades, the scope of disarmament has broadened to encompass also conventional weapons, including through the adoption of rules and regulations to govern arms transfers and measures to eliminate specific munitions from stockpiles and to destroy explosive remnants of war.

There have also been four "generations" of programmes to address small arms and light weapons at national or sub-national level through disarmament, demobilisation, and reintegration (DDR) programmes during and following the end of armed conflict.

While an internationally accepted definition of disarmament does not yet exist, it is widely agreed that disarmament encompasses or interrelates with prohibitions and restrictions on the development, production, stockpiling, testing, and transfer of weapons and on their destruction.

In addition to clarifying these elements, chapters of this guide will also consider the relationship between disarmament and the law of armed conflict, and with the United Nations Security Council, human security, public health, and non-state actors.

Contents:
Introduction
1. The core concepts of international disarmament law
2. The core elements of disarmament treaties
3. Disarmament, arms control, and security
4. Use and threat of use
5. Development and testing
6. Transfer
7. Stockpile destruction
8. Addressing the effects of weapons
9. Reporting, verification, and compliance
10. Disarmament, demobilisation, and reintegration (DDR)
Outlook

Series: Routledge Research in the Law of Armed Conflict