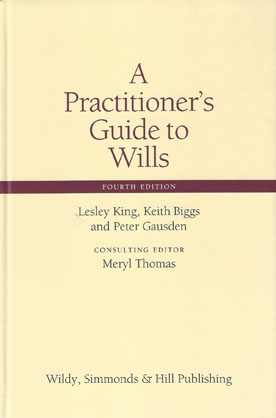 The fourth edition of this popular title provides a practical and comprehensive reference for all those concerned in drafting and interpreting wills, and in giving effect to their provisions.

The commentary is supported throughout by an extensive range of specimen clauses. and model wills are provided in a separate appendix. All precedent material is included on the accompanying CD-ROM, enabling practitioners to adapt precedents for their own use.

It examines the impact of these legislative changes as well as developments in taxation affecting wills, notably the new relevant property trust regime and its impact on pilot settlements, the new residence nil rate band, the reduced rate of IHT for gifts to charity and the new rules on trusts for disabled beneficiaries.

The impact of the new residence nil rate band on planning and drafting is considered, together with the role that nil rate band gifts and discretionary trusts might still have to play in financial planning. The chapter on construction of wills has been rewritten following the Supreme Court’s decision in Marley v Rawlings and subsequent cases including Reading v Reading are considered.

The chapter on testamentary capacity has been revised in the light of developments since the Mental Capacity Act 2005 including Simon v Byford which considered the extent to which dementia affects testamentary capacity. Other recent cases discussed include the Court of Appeal decisions in Ilott v Mitson and its implications for testators who wish to exclude close family members from benefit.

Contents:
Preface
Table of Precedents
Table of Cases
Table of Statutes
Table of Statutory Instruments
Table of Conventions;
1.
Introduction
2.
The Nature of a Will
3.
Testamentary Capacity
4.
Formal Requirements for the Creation of a Will
5.
Beneficiaries
6.
Beneficiaries Identified by Description or Relationship
7.
Revocation and Alteration
8.
Codicils, Revival and Republication
9.
Executors and Trustees
10.
The Disposal of the Body
11.
Foreign Property or Domicile
12.
Legacies
13.
Gifts of Businesses
14.
Gifts of Land
15.
Conditions Attached to Gifts
16.
Pilot Trusts
17.
Gifts of Residue
18.
Powers and Discretionary Trusts
19.
Income and Interest
20.
Abatement, Ademption, Election, Satisfaction and Conversion
21.
Testamentary Options to Purchase
22.
Administrative Provisions
23.
Perpetuities and Accumulation
24.
Construction
25.
Failure of Gifts and Intestacy
27.
Inheritance Tax
28.
Capital Gains Tax
29.
Settlements
30.
Tax-Efficient Will Planning
Appendices
A1 Complete wills and miscellaneous precedents;
A1A Standard will: full form (long)
A1B Mutual wills
A1C Will disposing of a business
A1D Will of widow(er) exercising power of appointment given by will of pre-deceased spouse
A1E Will giving nil rate band legacy to discretionary trust
A1F Simple will giving all property to another of full age absolutely
A1G Codicil made on separation from spouse prior to divorce
A1H Codicil reviving former will previously revoked
A1I Will providing for discretionary trust of income during perpetuity period with division of capital at the end of period between surviving beneficiaries
A1J Letter of wishes to trustees
A1K Deed of variation to sever beneficial joint tenancy and create nil rate band legacy
A1J Deed of variation of a will
A2 Nil rate band discretionary trusts with debt/charge provisions;
A2A Explanatory note
A2B Additional clauses for a will containing a nil rate band discretionary trust which is to include debt/charge provisions
A2C Debt scheme: draft letter from the executors to the trustees of the legacy fund (when a charge is being imposed by the executors)
A2D Debt scheme: securing the debt
Index