The Possibility of Religious Freedom: Early Natural Law and the Abrahamic Faiths 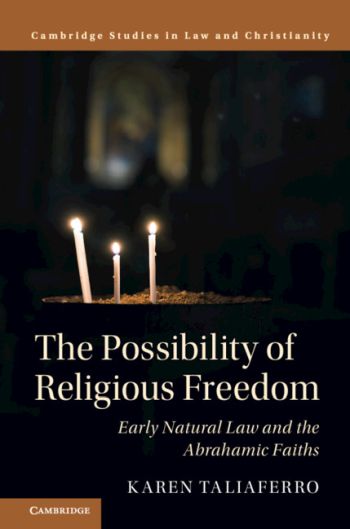 Religious freedom is one of the most debated and controversial human rights in contemporary public discourse. At once a universally held human right and a flash point in the political sphere, religious freedom has resisted scholarly efforts to define its parameters. Taliaferro explores a different way of examining the tensions between the aims of religion and the needs of political communities, arguing that religious freedom is a uniquely difficult human right to uphold because it rests on two competing conceptions, human and divine.

Drawing on classical natural law, Taliaferro expounds a new, practical theory of religious freedom for the modern world. By examining conceptions of law such as Sophocles' Antigone, Maimonides' Guide of the Perplexed, Ibn Rushd's Middle Commentary on Aristotle's Rhetoric, and Tertullian's writings, The Possibility of Religious Freedom explains how expanding our notion of law to incorporate such theories can mediate conflicts of human and divine law and provide a solid foundation for religious liberty in modernity's pluralism.

Contents:
Preface
1. Religion and Law in Late Modernity
2. Antigone: The Tragedy of Human and Divine Law
3. Maimonides' Middle Way: Teleology as a Guide for the Perplexed
4. Between Sharī'a and Human Law: Ibn Rushd and the Unwritten Law of Nature
5. Arguing Natural Law: Tertullian and Religious Freedom in the Roman Empire
Conclusion. Natural Law, Modernity and Aporia
Epilogue. Religious Freedom in Qatar.

How Marriage Became One of the Sacraments: The Sacramental Theology of Marriage from its Medieval Origins to the Council of Trent
Philiip Reynolds
ISBN 9781316509395
Published December 2018
Cambridge University Press
£22.99

How Marriage Became One of the Sacraments: The Sacramental Theology of Marriage from its Medieval Origins to the Council of Trent
Philiip Reynolds
ISBN 9781107146150
Published June 2016
Cambridge University Press
£110.00