How Marriage Became One of the Sacraments: The Sacramental Theology of Marriage from its Medieval Origins to the Council of Trent 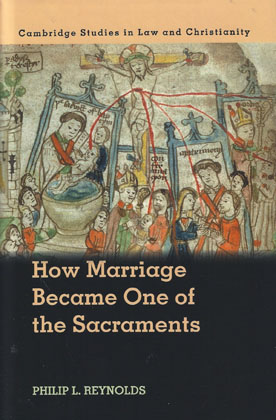 Among the contributions of the medieval church to western culture was the idea that marriage was one of the seven sacraments, which defined the role of married folk in the church.

Although it had ancient roots, this new way of regarding marriage raised many problems, to which scholastic theologians applied all their ingenuity. By the late Middle Ages, the doctrine was fully established in Christian thought and practice but not yet as dogma.

In the sixteenth century, with the entire Catholic teaching on marriage and celibacy and its associated law and jurisdiction under attack by the Protestant reformers, the Council of Trent defined the doctrine as a dogma of faith for the first time but made major changes to it. Rather than focusing on a particular aspect of intellectual and institutional developments, this book examines them in depth and in detail from their ancient precedents to the Council of Trent.

Contents:
1. Marriage as a sacrament
Part I. Augustine:
2. Marriage in Augustine's writings
3. Bonum prolis, bonum fidei: the utility of marriage
4. Bonum sacramenti: the sanctity and insolubility of marriage
Part II. Getting Married: Consent, Betrothal, and Consummation:
5. Betrothal and consent
6. Consummation
7. From competing theories to common doctrine in the twelfth century
Part III. The Twelfth Century: Origins and Early Development of the Sacramental Theology of Marriage: 8. Introduction to the sentential literature on marriage
9. The theology of marriage in the Sententiae
10. Hugh of Saint-Victor
11. The early doctrine of marriage as one of the sacraments
Part IV. The Thirteenth and Fourteenth Centuries: Development of the Classical Doctrine:
12. Marriage as union
13. Scholastic sexual ethics
14. Marriage as a sacrament
15. The question of grace
16. Human contract and divine sacrament
Part V. The Council of Trent:
17. On the eve of the General Council
18. The Sacrament of marriage at Bologna and Trent
19. Clandestine marriage: Bologna, 1547
20. Clandestine marriage: Trent, 1563.

How Marriage Became One of the Sacraments: The Sacramental Theology of Marriage from its Medieval Origins to the Council of Trent
Philiip Reynolds
ISBN 9781107146150
Published June 2016
Cambridge University Press
£110.00