Cases, Materials and Text on European Law and Private Law 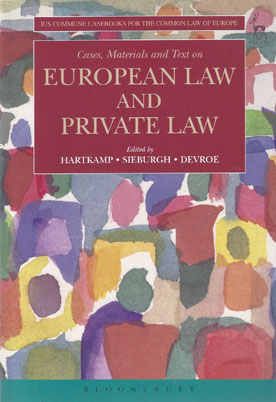 This Casebook deals with the horizontal effects of EU law with regard to its effects on relationships between individuals. To a large extent, these effects have been created by the Court of Justice of the European Union (CJEU) on the basis of the European Treaties.

Although the focus of this Casebook is on the effects of developments in primary EU law (in particular TFEU provisions, general principles and Charter provisions), secondary EU law must not remain out of sight. The CJ case law relating to (non-)implementation of directives (including harmonious interpretation of national law and Francovich liability of Member States) is interesting in theory and important in the practice of the Member States.

The same is true for the ex officio application of provisions of consumer law directives imposed by CJ case law relating to this subject. It is not the intention to enter into the details of secondary law, eg the way in which individual directives are interpreted by the CJ or transposed in specific Member States or how the transposing legislation is interpreted in Member States.