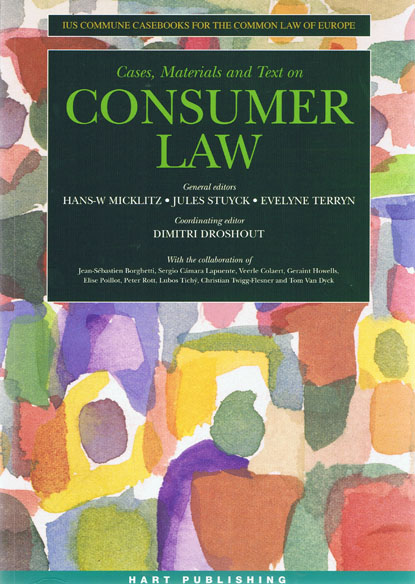 The objective of this casebook, like others in the Ius Commune Series, is to help uncover common roots, notwithstanding differences in approach, of the European legal systems, with a view to strengthening the common legal heritage of Europe.

The casebook covers the big legal families in the EU and contains judgments from the supreme courts and other courts of the Member States. In view of the importance of EC legislation (eg harmonisation directives and regulations) in this field, the consumer law casebook contains much material derived from Community law, such as extracts from directives (eg on unfair contract terms, distance selling, doorstep selling, product liability, package holiday tours etc) and judgments of the ECJ and national court decisions.

The casebook also compares harmonised and pre-harmonised law, especially in the case law of the Member States. The casebook concentrates on private law in the field of consumer protection but also addresses topics, in particular in the field of enforcement, that are primarily a matter of public law.