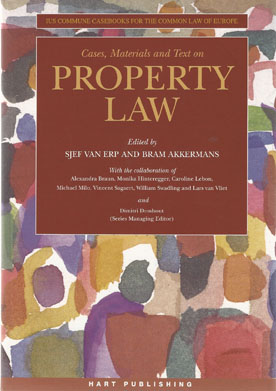 The influence of European economic integration on private law first became clear in contract and tort law as well as the law of unjustified enrichment. Traditionally, comparative lawyers considered the law of property (immovables, movables and claims) as too complex for harmonisation attempts.

In their view property law was very much a product of historical developments and political ideology. The divide between common law and civil law, particularly in the light of the way these two systems developed after the French Revolution, was seen as so deep that no common ground could be found.

Two examples can be given to illustrate this: the numerus clausus of absolute rights, a fundamental concept in the civil law, does not exist as such in the common law, whereas fragmentation of ownership (characteristic of the common law) is not accepted in civil law systems. Economic integration, however, follows its own path: integration of financial markets needs integration of mortgage law; intra-community trade demands that the validity and enforceability of security instruments such as retention of title does not depend on highly abstract rules of private international law.

This development has led to growing interest by comparative lawyers in the history, foundations, underlying principles and basic concepts of property law and the law of security rights (mortgages, pledges, retention of title etc.). This property law casebook examine all these aspects of property law in a systematic and accessible way.