Law and Politics at the Perimeter: Re-Evaluating Key Debates in Feminist Theory 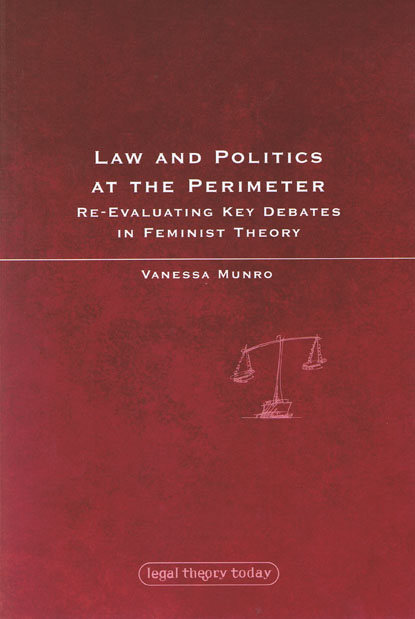 Feminist critique has made a significant impact both in terms of informing our theoretical approach to law and politics as social phenomena, and in terms of encouraging the development of increased opportunities and protection for individual women. Despite its successes, however, feminist thought has suffered from internal disagreements and schisms. Whilst united by their commitment to highlight and undermine gender-based discrimination, disparate feminist theorists have disagreed over a range of issues central to that project. In particular, there has been long-standing feminist debate over the utility of legal reform tactics, the patriarchal nature of the State, and the legitimacy of woman-centred methodology and grand-theorising.

The ferocity of these debates has intensified in contemporary times with the increasing reception of postmodern and pluralist analyses. Vehemently against the establishment of meta-narratives or essentialist accounts of generic womanhood, the postmodern insistence on subversion over critique, and on dislocation over collectivism, has severed an already fragile link between feminist theory and practice.

Set against this backdrop, this book offers a critical re-appraisal of contemporary feminist legal and political theory. It re-visits key feminist debates over the origins of patriarchy, as well as over the role of liberalism and the rule of law in its creation and perpetuation. It re-evaluates feminist calls for the dislocation of legal reform strategies and rights-based claims. And it draws upon the work of 'mainstream' analytical jurists, as well as philosophers like Foucault and Wittgenstein, to re-cast the terrain around key concepts of power, identity and equality within feminist political theory.