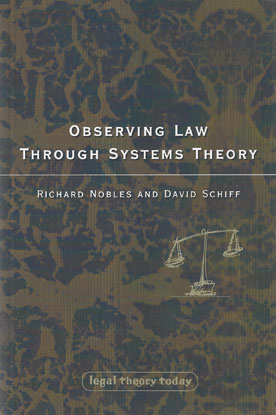 This book uses Niklas Luhmann's systems theory to explore how the legal system operates as one of modern society's subsystems.

The authors demonstrate how this theory alters our understanding of some of the most important and controversial issues within law: the nature of judicial communication and legal argument; the claim that it can be right to disobey law; the character of legal pluralism and globalisation; time and its construction within law; the significance of the rule of law and human rights and the role of appeals to, and within, law.

Systems theory enables the authors to demonstrate how the legal system observes its own operations through its own communications, and how this contrasts with the manner in which law is observed by other systems such as the media and politics.

In this context the authors explore the constraints imposed by systems, in particular the legal system, upon the individuals who participate in them.

Contents:
1.
Is the Legal System a System?
2.
Why Do Judges Talk the Way they Do?
Social Systems, Psychic Systems and Redundancy
Judicial Communications and 'Commitment' to the Legal System
Judicial Discretion
Conclusion
3.
Can One Have a Right to Disobey a Law?
Civil Disobedience within the Legal System
Civil Disobedience within the Political System
Social Movements and Civil Disobedience
Civil Disobedience within the Legal and Political Systems – A Case Study (Debbie Purdy's Case)
Conclusion
4.
Understanding Legal Pluralism
Brian Tamanaha's Criticisms of Systems Theory
How Does One Identify a Subsystem Code?
Law and Violence
Normative Pluralism
Pluralism and Translation
Exploring Legal Pluralism in Modern and Pre-modern Societies
Conclusion
5.
How Law Constructs Time
Time, Law and Politics
A Simple Example: The Presumption of Innocence
A Complex Example
6.
Politics and Law: The Rule of Law, Constitutional Law, and Human Rights
The Rule of Law
Constitutional Law
Constitutional and Human Rights, and Societal Constitutionalism
7.
Control through Law
Steering through Constituting Rules
Observing Reflexive Law
Structural Coupling Dynamics
8.
Appeals in Law
Appeals and Doctrine
The Structural Coupling between Law and the Media through Conviction
Implications of Criminal Appeals for the Structural Coupling between Law and the Media
The Pressures Generated by the Differences between the Media and the Legal System's Understanding of Appeal
Postscript: A Comment on Human Involvement