Consent in the Law 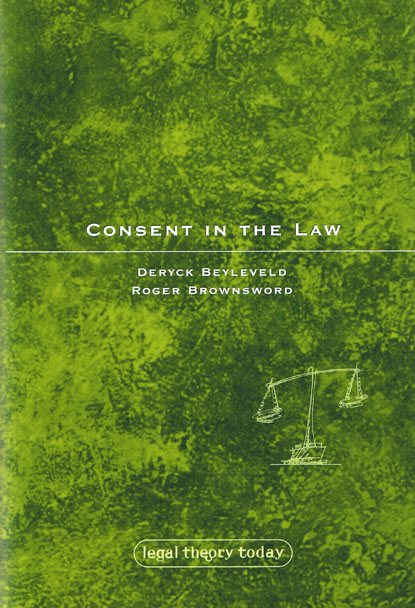 In a community that takes rights seriously, consent features pervasively in both moral and legal discourse as a justifying reason: stated simply, where there is consent, there can be no complaint. However, without a clear appreciation of the nature of a consent-based justification, its integrity, both in principle and in practice, is liable to be compromised.

This book examines the role of consent as a procedural justification, discussing the prerequisites for an adequate consent -- in particular, that an agent with the relevant capacity has made an unforced and informed choice, that the consent has been clearly signalled, and that the scope of the authorisation covers the act in question. It goes on to highlight both the Fallacy of Necessity (where there is no consent, there must be a wrong) and the Fallacy of Sufficiency (where there is consent, there cannot be a wrong). Finally, the extent to which the authority of law itself rests on consent is considered.

If the familiarity of consent-based justification engenders confusion and contempt, the analysis in this book acts as a corrective, identifying a range of abusive or misguided practices that variously under-value or over-value consent, that fictionalise it or that are fixated by it, and that treat it too casually or too cautiously. In short, the analysis in Consent in the Law points the way towards recognising an important procedural justification for precisely what it is as well as giving it a more coherent application.

Contents:
1.
Consent in the Law: A Preliminary Examination
PART ONE: A GEWIRTHIAN APPROACH TO CONSENT IN THE LAW
2.
The Principle of Generic Consistency: Its Justification and Application
3.
The Functions of Consent in the Law
PART TWO: CONSENT IN THE LAW I: QUESTIONS OF ADEQUACY
4.
Subjects of Consent: Questions of Capacity and Competence
5.
The Conditions of (Valid) Consent I: Unforced and Informed Choice
6.
The Conditions of Consent II: Duress, Undue Influence, and Disclosure
7.
Questions of Signalling and Scope, Withdrawal, and Refusal
PART THREE: CONSENT IN THE LAW II: QUESTIONS OF NECESSITY AND SUFFICIENCY
8.
The Necessity, Sufficiency, and Relevance of Consent I: Private Wrong and Private Empowerment
9.
The Necessity, Sufficiency, and Relevance of Consent II: Public Wrong
PART FOUR: CONSENT AS THE BASIS OF LEGAL (POLITICAL) AUTHORITY AND OBLIGATION
10.
Consent and the Stability and Authority of Law
11.
Consent as Procedural Justification: Concluding Remark