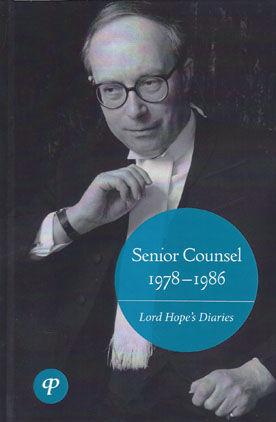 Senior Counsel, the first book in the series, covers the period from his taking silk in 1978 to the months before his election as Dean of the Faculty of Advocates. For the first four years David Hope served as an advocate depute.

The diary during this period describes the rough and tumble of criminal trials, but it was still possible for someone who was doing this job to vary it with other work. Much of his work was related in some way to the North Sea oil and gas industry, as was the long-running case in which he was acting for an American corporation which occupies much of the second part of this period.

The stresses and excitement of a busy practice are described throughout the book in vivid detail, as are the personalities of those before whom he appeared and with whom he worked during this stage in his career.