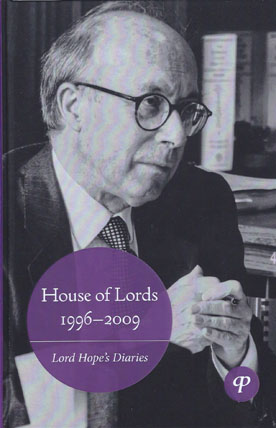 This, the fourth volume of Lord Hope’s Diaries, describes David Hope’s work in London as one of the two Scottish Lords of Appeal in Ordinary. During this time he sat as a member of the Appellate Committee of the House of Lords, and of the Judicial Committee of the Privy Council.

There are vivid descriptions of issues that the Law Lords had to decide, and of how they were resolved. These are set against the background of Lord Hope’s other life as a life peer in the House of Lords. This was also a period of reform. First, there was the removal of all but a few of the hereditary peers. Then it was announced that the Law Lords too were to leave, as there was to be a new Supreme Court.

It was an uneasy period, as much of the planning for the creation of that court had to be worked out by the Law Lords themselves. The volume concludes with the delivery of their last judgments in the House, ending the unique life that they had led there.