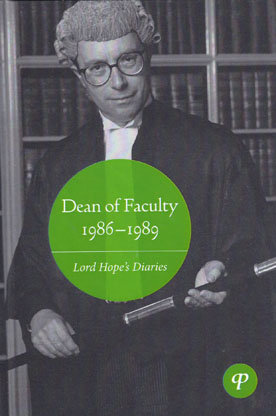 This book, the second in a series of three, covers David Hope's time as the Dean of the faculty of Advocates. As Dean he represented the Faculty at home and abroad, while also maintaining a busy practice at the Bar.

Among the challenges he faced was persuading the Faculty to accept reforms to enable it to compete effectively with the Law Society of Scotland, which was pressing hard for the right of audience in the Supreme Courts to be extended to solicitors.

Reform of the legal profession was also government policy, so the Faculty had to engage in public relations to a much greater extent than it had done previously. Detailed accounts are given of events within the Faculty, whose membership has now grown far beyond what it was during this period, and of visits to France, Belgium, the Netherlands and Canada.

The personalities of those with whom he dealt play a major part in the narrative.