Assessing the Effectiveness of International Courts 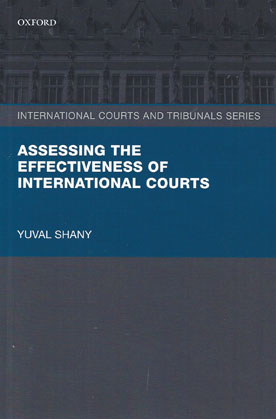 Are international courts effective tools for international governance? Do they fulfill the expectations that led to their creation and empowerment? Why do some courts appear to be more effective than others, and do so such appearances reflect reality? Could their results have been produced by other mechanisms?

This book evaluates the effectiveness of international courts and tribunals by comparing their stated goals to the actual outcomes they achieve.

Using a theoretical model borrowed from social science, the book assesses their effectiveness by analysing key empirical data. Its first part is dedicated to theory and methodology, laying out the effectiveness model, explaining its different components, its promise and limits, and discussing the measurement challenges it faces.

The second part analyses the role that indicators such as jurisdiction, judicial independence, legitimacy, and compliance play in achieving effectiveness. Part three applies the effectiveness model to the International Court of Justice, the WTO dispute settlement mechanisms (panels and Appellate Body), the International Criminal Tribunals for Rwanda and Yugoslavia, the European Court of Human Rights, and the European Court of Justice, reflecting the diversity of the field of international adjudication.

Given the recent proliferation of international courts and tribunals, this book makes an important contribution towards understanding and measuring the value that these institutions provide.