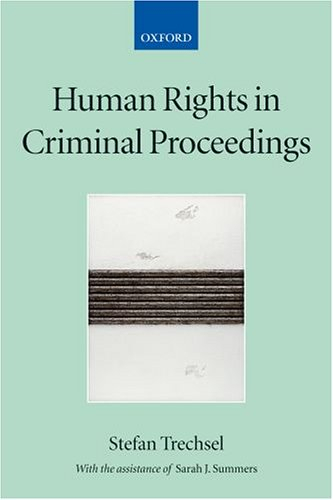 During the last 50 years interest in human rights has grown dramatically. Whilst newspapers focus mainly on dramatic issues: unlawful killing, torture, disappearances, or violations of freedom of speech; institutions charged with the implementation of human rights (as set out in international conventions and covenants) most frequently deal with allegations of human rights violations during criminal proceedings. The increasing internationalization of the administration of criminal;law means that such cases are likely to become ever more important.

In this book, the case-law of the international bodies dealing with such cases is presented and critically examined by an author who has contributed to its creation for almost a quarter of a century. The European Commission and European Court of Human Rights, in particular, have accumulated a considerable quantity of case-law, which is particularly interesting because it is intended to be valid in both Anglo-Saxon and Continental systems of criminal procedure.The law of the European Convention;is emphasized because of its advanced procedures and the quality and quantity of its case-law.

. Winner of the ASIL Award for a Work which Exhibits High Technical Craftsmanship 2005

Series: Collected Courses of the Academy of European Law