This book is now Out of Print.
A new edition has been published, the details can be seen here:
The Sources of International Law 2nd ed isbn 9780198841814

The Sources of International Law 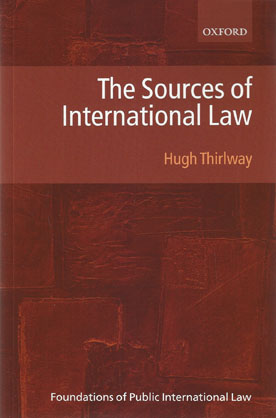 The question of what is, and what is not, part of international law is fundamental in shaping its current form and its development. Traditionally, treaties between states and state practice were seen as the primary means with which to create international law.

The book provides a perfect introduction to the law of sources, as well as innovative perspectives on new developments, making it essential reading for anyone studying or working in international law.

Contents:
1. The nature of international law and the concept of sources
2. The classic definition: Article 38 of the ICJ Statute and its background
3. Application of the classic definition to the production of exceptional norms peremptory norms (jus cogens), rights and obligations erga omnes, non-binding norms,"soft law"
4. Non-statutory sources
5. Specialised fields, including human rights, judicial procedure, in particular that of the ICJ
UN procedural law
6. Other possible contributors to law: international corporations
national courts
7. Conclusion