Counter-Terrorism and Beyond: The Culture of Law and Justice After 9/11 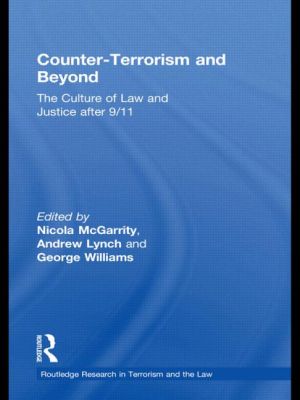 This book considers the increasing trend towards a 'culture of control' in democratic countries. The post-9/11 counter-terrorism laws in nations such as the USA, the UK, Canada and Australia provide a stark demonstration of this trend. These laws share a focus on the pre-emption of crime, restrictions on the right to liberty of non-suspects, limited public access to information, and increased community surveillance. The laws derogate, in many respects, from the ordinary principles of the criminal justice system and fundamental human rights while also harnessing public institutions in the broader project of prevention and control. Distinctively, the contributors to this volume focus on the impact of these laws outside of the counter-terrorism context.

The book draws together a range of experts in both public and criminal law, from Australia and overseas, to examine the effect of counter-terrorism laws on public institutions within democracies more broadly. Issues considered include changes to the role and functions of the courts, the expansion of executive discretion, the seepage of extraordinary powers and pre-emptive measures into other areas of the criminal law, and the interaction and overlap between intelligence and law enforcement agencies. Counter-Terrorism and Beyond: The Culture of Law and Justice After 9/11 will be of interest to students and scholars of criminal law, criminology, comparative criminal justice, terrorism and national security, public law, human rights, governance and public policy.

Contents:
Part 1: Introduction
1. The Emergence of a 'Culture of Control', Andrew Lynch, Nicola McGarrity and George Williams
Part 2: Prevention and Pre-Emption, Evidence and Intelligence
2. Counter-Terrorism: The Law and Policing of Pre-Emption, Jude McCulloch and Sharon Pickering
3. The Counter-Terrorism Purposes of an Australian Preventative Detention Order, Claire Macken
4. The Eroding Distinction Between Intelligence and Evidence in Terrorism Investigations, Kent Roach
Part 3: Community Surveillance and the Creation of a Culture of Suspicion
5. Constitutional Criminal Procedure and Civil Rights in the Shadow of the 'War on Terror': A Look at Recent United States Decisions and the Rhetoric of Terrorism, Charles Weisselberg
6. Suspicionless Searches and the Prevention of Terrorism, John Ip
7. A Passport to Punishment: Administrative Measures of Control for National Security Purposes, Susan Harris Rimmer
Part 4: The Normalisation of Extraordinary Measures
8. When Extraordinary Measures Become Normal: Pre-Emption in Counter-Terrorism and Other Laws, Nicola McGarrity and George Williams
9. The Anti-Terror Creep: Law and Order, the States and the High Court of Australia, Gabrielle Appleby and John Williams
Part 5: The Flow of Information in Liberal Democracies
10. Proxies for the Authorities? Using Media Information in the Investigation and Prosecution of Terrorism Offences, Lawrence McNamara
11. The Show Must Go On: The Drama of Dr Mohamed Haneef and the Theatre of Counter-Terrorism, Mark Rix
Part 6: Judicial Review and the Parliamentary Process: How Best to Protect Human Rights?
12. Extra-Constitutionalism, Dr Mohamed Haneef and Controlling Executive Power in Times of Emergency, Fergal Davis

Series: Routledge Research in Terrorism and the Law