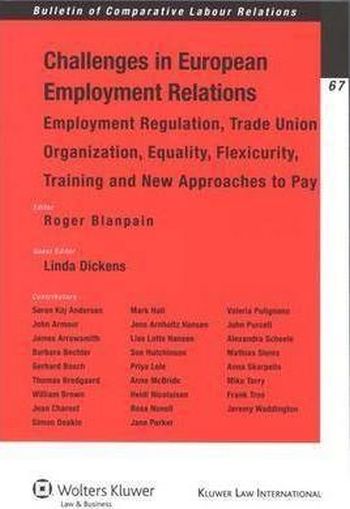 Has European economic and market integration curtailed the autonomy of national industrial relations actors and institutions? Or has it reinforced their roles in securing much-needed economic adjustment? This important book offers a deeply-informed comparative perspective on these questions, drawing on empirical research on changing conditions within and beyond the EU. The book builds on papers presented at the 8th European Regional Congress of the International Industrial Relations Association, held in the UK in September 2007. The authors are leading academic authorities from Austria, Belgium, Canada, Denmark, Germany, The Netherlands, Norway, Spain, and the United Kingdom. With detailed attention to such pervasive factors as the consequences of EU enlargement, the shift from manufacturing to services, changes in the gender composition and demographic profile of the labour force, and the growing influence of multinational companies, the authors address such issues as the following: - response of national employment regulatory traditions to globalization, privatization, outsourcing and budgetary pressures; emergence of new forms of competitive advantage for both employers and employees; impact of EU-mandated information and consultation mechanisms; possibility of international union action and transnational solidarity; 'flexicurity' and the changing demographics of the labour force; gender democracy in trade unions; trade union mergers; statutory minimum conditions as an alternative to collective bargaining; regulation or culture change to promote equality; treatment of posted and migrant workers within increasingly transnational labour markets; growth in variable pay systems; and possible rebirth of vocational training systems and apprenticeships. Offering in-depth comparative insights into the way in which national and international systems of employment relations are evolving rapidly in the face of cross-cutting pressures for change, this book illuminates a vastly complex state of affairs. In practical terms, its many insights into how current trends affect specific working conditions open the way to new initiatives in developing and maintaining a just and equitable employment relations regime for Europe and beyond.

The Impact of the Internet and New Technologies on the Workplace
Michele Colucci
ISBN 9789041118240
Published July 2002
Kluwer Law International
£140.00

The Process of Industrialization and the Role of Labor Law in Asian Countries ISBN 9789041110473
Published April 1999
Kluwer Law International
£102.00