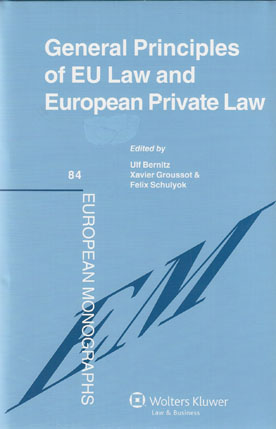 This book addresses and highlights the core issues concerning general principles of EU law and their relationship with and impact on private law.

With the entry into force of the Lisbon Treaty, the EU Charter of Fundamental Rights became a legally binding source of primary law and highlights, together with the General Principles of EU law, the importance of fundamental rights in the legal system of the Union. This increased visibility means that private parties have begun to rely on fundamental rights arguments in proceedings in front of national courts and Union courts more and more often.

Amongst many other issues this development brings important questions relating to the effects of EU fundamental rights on private law to the forefront. After an introductory chapter by the editors the following four overarching themes provide the structure of this book and broadly reflect the approaches discussed in its eighteen essays:-

This book reflects the continuous relevance and the need to re-examine the effects and the status of General Principles of EU law, which have been dealt with already twice before (in 1999 and 2007) by the group that has compiled the present volume,the Swedish Network for European Legal Studies.

The discussion that emerges is, here as before, of immense significance both for theoretical legal studies and for legal practice. The eighteen essays here printed are all final author-edited versions of papers first presented at the Network’s conference in Stockholm in November 2012. The authors include both eminent, well-known experts, and representatives of a new generation of younger scholars in the field.

For the many parties involved in the volution of the European project from a legal perspective, this book will serve as a watershed, a thorough inspection of the foundations as they are perceived and understood at the present moment. It is sure to be consulted and cited often in the years to come.