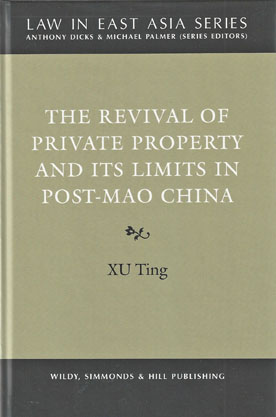 This monograph examines the nature and significance of the re-emergence of private property in rapidly changing post-Mao China.

In examining this issue, the study explores a key dichotomy in Chinese law, that is, ‘public versus private’, and examines the manner in which the Chinese define ownership. The study stresses the importance of lack of clarity in the boundaries between the public and the private in property rights.

While there is a limited move towards the recognition of private property in real estate in contemporary China, this analysis also shows that ownership in the law, and ownership as understood and practised socially, often diverge significantly.

These conceptions and theories served (and still serve) the purposes of control and governance but were, and still are, often resisted in social practice and popular thinking, leading to alienation and conflict. As a result, analysis of the nature and the social and political implications of re-emerging private property rights provides important insights for our understanding of the changing nature of modern China.