Manufactured Obscurity: The Postcolonial Erasure of Suzerainty and the Changing Legal Status of Tibet 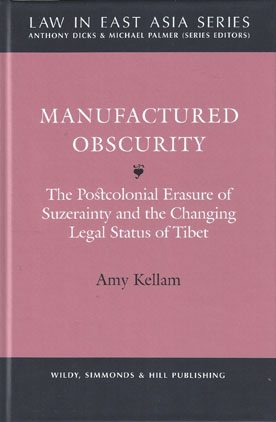 In 1951 Tibet was incorporated into the People’s Republic of China by the Seventeen Point Agreement. Today the legal status of Tibet remains a matter of contention between the PRC and the Tibetan-Government-in-Exile. Both rely upon on legally ambiguous British engineered treaties to make their case.

Drawing upon British Government archives, this book examines the issue: to what extent, in what ways, and with what effects has the British imperial legacy in the region converged with Chinese formulations of law and governance in Tibet to prejudice understanding of Tibet’s legal status. This addresses a significant gap in international legal literature, which seldom discusses Tibet outside of considerations of minority rights within the PRC.

This book argues that an assessment of imperialism and its relationship with nineteenth century international law is essential to explaining the events of 1951, but it is only through a reassessment of the postcolonial that the absence of discussion of Tibet’s status in international legal discourse can be explained. The history of Tibet’s legal status highlights contradictions embedded within modernity and exposes the mythological foundations of the modern secular state’s narrative of progress.

Manufactured Obscurity concludes that the much emphasised clash between Western and East Asian values in the field of international law in truth operates along a much narrower divide than might be presumed. This is best assessed as a reflection of the contradictions inherent to the postcolonial within international law; involving both a pushing away of the imperialistic past and a reaffirmation of its continuity in order that modern commitments to the rule of law retain value.

Contents:
Chapter One;
The Tibetan Legal Tradition
The Tibetan Administrative System
Tibetan Relations with the Mongols;
Tibetan Relations with the Ming Dynasty;
Tibetan Relations with the Qing Dynasty;
Tibetan Buddhism at the Qing Court
Chapter Two;
The Frontier in Qing China;
The Unequal Treaty System;
British India and Tibet;
The Great Game;
Beyond the Pass: From Unbounded Empire to Nation State;
Chapter Three;
Modernity as Myth;
China’s Engagement with International Law in the Nationalist Era: The Standard of Civilisation;
The London Conference of 1871;
Chapter Four;
Race and Nation in the Republic of China;
Scientific Administration, Modernity and Chinese Nationalism;
Chapter Five;
Tibetan Modernisation;
The Simla Convention;
Suzerainty in Postcolonial Legal Discourse;
The Tibetan Trade Missions;
The Tibetan Appeals to the U.N.;
The Seventeen Point Agreement and Tibet’s Changing Status in the Postcolonial World
Chapter Six;
The Seventeen Point Agreement;
Regional National Autonomy in the Mao Era;
Regional National Autonomy in the Post Mao Era;
The 2005 Provisions on the Implementation of the Law of the People’s Republic of China on Regional Autonomy;
Chapter Seven;
The Seventeen Point Agreement (1951-1959);
Democratic Reform (1959-1966);
The Cultural Revolution 1966-1977;
Post-Mao Reform Era 1978-1988;
Lhasa Unrest 1989 – Present day;
Contemporary Constitutional Framework;
Subsidiary Legislation Governing Religious Activity;
The Religious Affairs Regulations;
The TAR Implementing Measures;
Problems Arising From the Unique Implementation of National Policy in Tibetan Areas;
Managing Religion According to Law;
The Management Measures for the Reincarnation of Living Buddhas in Tibetan Buddhism
The MMR in Historical Perspective;