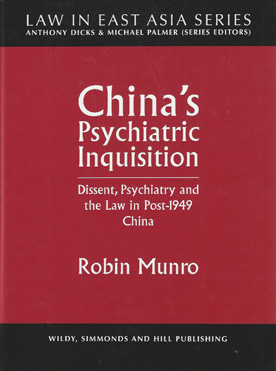 This study examines the misuse of forensic psychiatry custody in China since the late 1950s as an adjunct means – alongside the legal authorities’ more frequent use of arrest, trial and imprisonment – of punishing and silencing political dissidents, spiritual nonconformists, whistleblowers and other critics of official corruption or malfeasance.

The principal questions addressed in the book are: how common have such practices been in China during the successive main periods in the country’s post-1949 history; how have these repressive practices been theorized and handled under the country’s evolving criminal justice system; and why have the security authorities resorted to this, at first sight, uncharacteristically sophisticated form of state repression?

On the basis of extensive archival research into several decades of China’s legal and psychiatric literature, the study concludes that the use of psychiatric custody against dissidents and other similar groups has been more widespread in China than it was in the former Soviet Union.

This is a pathbreaking work in China studies, a chilling account of psychiatric abuse of political dissidents dating back to the early days of the Chinese regime and extending to the present. Munro's remarkable research brings to light the sufferings of thousands of previously unsuspected victims, some detailed in heart-breaking case studies.

Far from being an obscure corner of the Chinese system, the gulag of psychiatric abuse proves to be diagnostic of fundamental flaws in Chinese-style rule of law and state-dominated medicine. Munro's earlier research sparked an international campaign to seek improvements. This new, full account of his findings will stand as a classic of human rights research while it deepens our understanding of the Chinese legal and political system.

Contents:
PART I: LEGAL CONTEXT AND OVERVIEW
1. Judicial Psychiatry and Political Dissent in China
2. China’s Legal Reforms and the Concept of Criminal Insanity
I. China’s Post-1978 Legal Reforms and Progress towards the Rule of Law
II. The Legal Handling of Political Crime in China
III. The Concept of Criminal Insanity
IV. International Legal and Ethical Standards on Psychiatric Custody
PART II: POLITICIZED PSYCHIATRY UNDER MAO
3. Law and Psychiatry from 1949 to the Early 1960s
I. Judicial Treatment of Insanity Prior to 1949
II. Inauspicious Beginnings: The Early Years of the People’s Republic
4. The Cultural Revolution
I. Forensic Psychiatry in Crisis
II. General Psychiatry in Crisis
III. Medical Neglect and Prison Psychosis
PART III: POLITICIZED PSYCHIATRY AFTER MAO
5. The Legal Context for the Handling of Mentally Ill Offenders
I. A Nuanced Reversal of Policy
II. Legal Norms and Procedures for the Handling of Psychotic Offenders
III. The Psychiatrist and the Dissident: Some Thorny Legal-Medical Issues
6. Close Encounters of the Legal Psychiatric Kind
I. Counterrevolutionary Behaviour by the Mentally Ill
II. How to Distinguish a Paranoiac from a Political Dissident
III. Authentic and Borderline Cases: “Folie Politique”
IV. A Theory of “Political Insanity” for the New Millennium
7. The Falun Gong: Chinese Dissent Goes Cosmic
I. The Reappearance of the “Ideological Defect” Theory
II. Legal and Medical Justifications for the Crackdown
III. The Forensic Assessment of Falun Gong Detainees: Four Cases
8. The Ankang: China’s Special Psychiatric Hospitals
I. Background
II. The Ankang Custody and Treatment System
III. The Victims Go to Court: Case Notes from the Ankang, 2000-2005
9. The International Campaign
10. Conclusions
Glossary
Table of Legislation
Bibliography