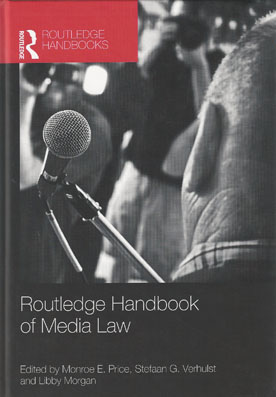 Featuring specially commissioned chapters from experts in the field of media and communications law this book provides an authoritative survey of media law from a comparative perspective.

The handbook will not simply offer a synopsis of the state of affairs in media law jurisprudence. Rather it will provide a better understanding of the forces that generate media rules, norms, and standards, perpetuate them, and foster change in them against the background of major transformations in the way information is mediated as a result of democratization, economic development, cultural change, globalization and technological innovation.

The book addresses a range of issues including: Media Law and Evolving Concepts of Democracy Network neutrality and traffic management Public Service Broadcasting in Europe Interception of Communication and Surveillance in Russia State secrets, leaks and the media

A variety of rule-making institutions are considered, including administrative, and judicial entities within and outside of government, but also entities such as associations and corporations that generate binding rules. The book assesses the emerging role of supranational economic and political groupings as well as of non-Western models, such as China and India, where cultural attitudes toward media freedoms are often very different.