Proportionality, Equality Laws and Religion: Conflicts in England, Canada and the USA 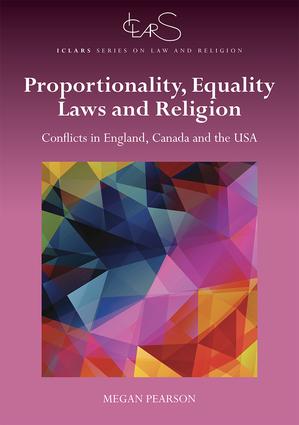 This book considers how the law should manage conflicts between the right of religious freedom and that of non-discrimination on the grounds of sexual orientation. These disputes are often high-profile and frequently receive a lot of media attention and public debate.

Starting from the basis that both these rights are valuable and worthy of protection, but that such disputes are often characterised by animosity, it contends that a proportionality analysis provides the best method for resolving these conflicts. The work takes a comparative approach, examining the law in England and Wales, Canada, and the USA and examines four main areas of law, considering how a proportionality approach could be used in each.

The book will be an invaluable resource for students and researchers in the areas of Public Law, Human Rights Law, Law and Religion, Discrimination Law, and Comparative Law.