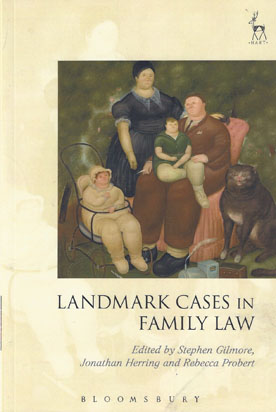 There are a number of important (landmark) cases in the development of Family Law in England and Wales which deserve detailed examination and lend themselves particularly well to historical examination.

Consequently, the landmark cases chosen for this collection provide considerable scope, not only for doctrinal analysis and explanation of the importance and impact of the decisions, but also for in-depth examination of the social or policy developments that influenced them.

The stories behind the cases provide a fascinating insight into the complexities of family life and the drama that can be found in the family courts.

In recent years, Family Law has seen enormous changes in law's engagement with the notion of 'family', with the enactment, for example, of the Civil Partnership Act 2004, the Gender Recognition Act 2004 and, more recently, the Human Fertilisation and Embryology Act 2008.

As we begin to move forward into the new millennium, this is an excellent time to engage in detailed analyses and 'stock-taking' of the landmark decisions, many of which were decided in the 1970s, and which have shaped modern family law. This book provides a series of in-depth studies of the key leading cases, and will be of interest to students and lecturers alike.