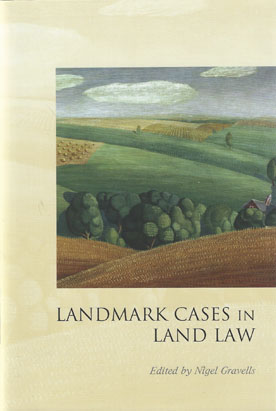 Landmark Cases in Land Law is the sixth volume in the Landmark Cases series of collected essays on leading cases (previous volumes in the series having covered Restitution, Contract, Tort, Equity and Family Law).

The eleven cases in this volume cover the period 1834 to 2011, although, interestingly, no fewer than six of the cases were decided or reported in the 1980s. The names of the selected cases will be familiar to property lawyers. However, individually, the essays provide a reappraisal of the cases from a wide range of perspectives - focusing on their historical, social or theoretical context, highlighting previously neglected aspects and even questioning their perceived importance.

Collectively, the essays explore several common themes that pervade the law of property the numerus clausus principle, the conclusiveness of registration, the desirability of certainty in the law and the central question of the enforceability of interests through changes in ownership of land. This volume provides a collection of essays that will be of interest to academics, students and practitioners.