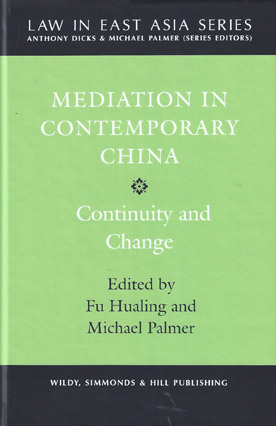 This collection of essays is the result of a collaborative project between Professors Fu Hualing and Michael Palmer, along with scholars in both Hong Kong and mainland China, on the nature and place of mediation in the justice system of the People's Republic of China.

The project explores key aspects of the continuing central importance of mediation as a dispute resolution process, the various efforts at the refurbishment of mediation that have been made over the past decade or so, and the reforms that would best enhance the practice, theory and teaching of mediation.

Mediation is used In China today for handling disputes in a variety of institutional contexts: ‘people’s mediation’, which is primarily a form of local community dispute resolution, judicial mediation carried out by judges in and around the court, administrative mediation as conducted by officials and often focused on specific areas of governmental responsibility (as, for example, is the case with environment disputes), mediation in arbitral proceedings, and private mediation carried out without specific institutional support.