Accounting for Profit for Breach of Contract: Theory and Practice 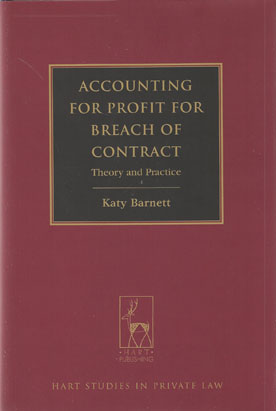 This book defends the view that an award of an account of profits (or 'disgorgement damages') for breach of contract will sometimes be justifiable, and fits within the orthodox principles and cases in contract law. However there is some confusion as to when such an award should be made.

The moral bases for disgorgement damages are deterrence and punishment, which shape the remedy in important ways. Courts are also concerned with vindication of the claimant's performance interest, and it is pivotal that the claimant can procure a substitute performance via an award of damages or specific relief.

Moreover, disgorgement may be full or partial, and 'reasonable fee damages' for breach of contract are best understood as partial disgorgement rather than 'restitutionary damages'. Equitable bars to relief should also be adopted in relation to disgorgement damages, as should allowances for skill and effort.

This book will be of interest to contract and commercial lawyers, and will be especially valuable to anyone with an interest in contract remedies and restitution. It draws on case law in a number of common law jurisdictions, primarily England & Wales, and Australia.