Legislation and Reform in the Law of Obligations 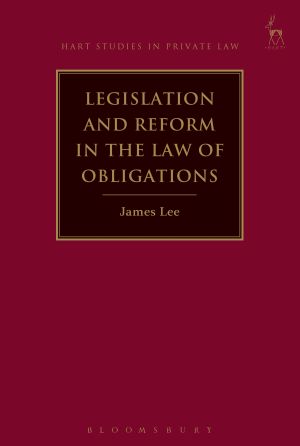 This book presents a study of the ways in which legislation shapes and develops the law of obligations. Currently, the role which legislation plays in the laws of tort, contract and unjust enrichment is under-theorised, and yet it is increasingly significant in the law of obligations, both in its own right and as the focus of decisions at the highest appellate levels. The book offers a comparative account of the law in England and Wales and Australia, drawing in particular on the experiences of the Australian states under the various Civil Liability Acts of the early years of this century. There are various constitutional restrictions on the extent to which legislation may interfere with existing private law rights and obligations, and the book examines the applicable jurisprudence in the contexts of European, human rights and Australian constitutional law.

Developing a coherence-based approach, it is argued that the processes of legislation ought to involve more faithful engagement with the applicable principles than is often the case. The book addresses particular problems such as the application of limitations statutes, the scope of purportedly exclusive legislative schemes and the question of when a change in the law of obligations ought to be left to the legislature. The book argues that respect for coherence is not merely a matter of doctrinal purity, but also translates into more effective legislation.