The Law of Misstatements: 50 Years On from Hedley Byrne v Heller 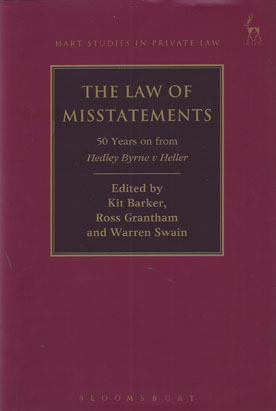 2013 was the 50th anniversary of the House of Lords’ landmark decision in Hedley Byrne v Heller. This international collection of essays brings together leading experts from five of the most important jurisdictions in which the case has been received (the United Kingdom, the United States, New Zealand, Canada and Australia) to reappraise its implications from a number of complementary perspectives – historical, theoretical, conceptual, doctrinal and comparative.

It explores modern developments in the law of misstatement in each of the jurisdictions; examines the case’s profound effects on the conceptual apparatus of the law of negligence more generally; explores the intersections between misstatement liabilities in contract, tort, equity and under statutory consumer protection provisions and critically assesses the ways in which advisor liabilities have come to be limited and distributed under systems of ‘joint and several’ and ‘proportionate’ liability respectively.

Inspired by Hedley Byrne, the purpose of the collection is to reflect on the case’s echoes, effects and analogues throughout the private law and to provide a platform for thinking about the ways in which liabilities for misstatement and pure economic loss should be modelled in the modern day.

Contents:
Part 1: Issues
1. Hedley Byrne v Heller : Issues at the Beginning of the Twenty-First Century Kit Barker
Part 2: History, Concepts and Theory
2. Hedley Byrne v Heller in Australia: 'Never has there been such a Judicial Jamboree ' Warren Swain
3. The Assumption of Responsibility Andrew Robertson and Julia Wang
4. The Basis of the Hedley Byrne Action Allan Beever
5. The Curious Incident of the Dog that did Bark in the Night-Time: What Mischief does Hedley Byrne v Heller Correct? David Campbell
Part 3: Intersections and Distributions of Liability
6. Equity as Tort? Paul Finn
7. Limitations on Defendant Liability for Misleading or Deceptive Conduct Under Statute: Some Insights from Negligent Misstatement Elise Bant and Jeannie Paterson
8. Advisor Liability: Claims for Contribution or Reimbursement Between an Advisor and the Advisee's Contract-Partner Sirko Harder
Part 4: Comparative Perspectives
9. What are We Doing Here? The Relationship Between Negligence in General and Misstatements in English Law Christian Witting
10. Negligent Misstatement in the United States Jay M Feinman
11. Hedley Byrne : Misused, then Exiled by the Supreme Court of Canada Bruce Feldthusen
12. Liability Under Hedley Byrne for 'Pre-Contract' Negligent Misrepresentation: A New Zealand Perspective David McLauchlan
13. Negligent Misstatement in Australia- Resolving the Uncertain Legacy of Esanda Kit Barker