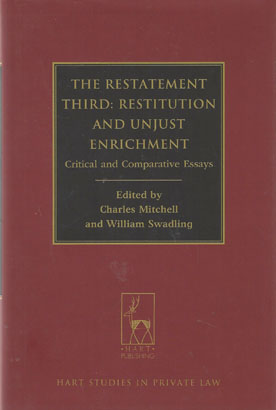 The publication of The Restatement Third: Unjust Enrichment and Restitution by the American Law Institute in July 2010 was an event of major importance, not only for the development of the law of unjust enrichment in the US, but also for global scholarship relating to this area of private law.

The Restatement First appeared in 1937, and the Restatement Second was abandoned; hence the Restatement Third is the most significant survey of the American law on this topic for over 70 years. Private law has been a comparatively neglected area of study in US law schools for several decades, and this is particularly true of the law of unjust enrichment.

However, the appearance of the Restatement Third has prompted a renewal of interest in this fascinating subject among US scholars, and it is hoped that the present volume of essays will contribute to this revival, while reflecting on the lessons to be learned from the Restatement by other legal systems. Featuring the work of leading scholars from the UK, Germany, South Africa, Canada, Hong Kong and Australia, the essays undertake critical and comparative analysis of the Restatement, and offer fresh insights into the rules that it articulates.