Evidential Uncertainty in Causation in Negligence 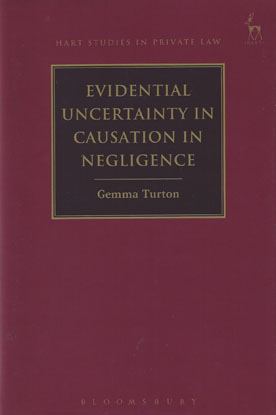 This book undertakes an analysis of academic and judicial responses to the problem of evidential uncertainty in causation in negligence.

It seeks to bring clarity to what has become a notoriously complex area by adopting a clear approach to the function of the doctrine of causation within a corrective justice-based account of negligence liability. It first explores basic causal models and issues of proof, including the role of statistical and epidemiological evidence, in order to isolate the problem of evidential uncertainty more precisely.

Application of Richard Wright's NESS test to a range of English caselaw shows it to be more comprehensive than the 'but for' test that currently dominates, thereby reducing the need to resort to additional tests, such as the Wardlaw test of material contribution to harm, whose scope and meaning are uncertain.

The book builds on this foundation to explore the solution to a range of problems of evidential uncertainty, focusing on the Fairchild principle and the idea of risk as damage, as well as the notion of loss of a chance in medical negligence which is often seen as analogous with 'increase in risk', in an attempt to bring coherence to this area of the law.