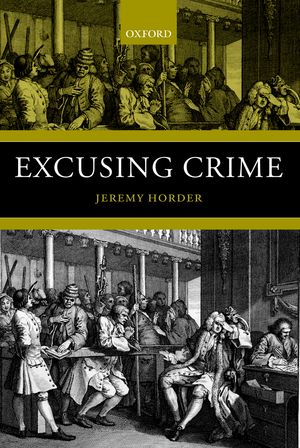 When should someone who may have intentionally or knowingly committed criminal wrongdoing be excused? Excusing Crime examines what excusing conditions are, and why familiar excuses, such as duress, are thought to fulfil those conditions. The 'classical' view of excuses sees them as rational defects (such as mistake) in the motive force behind an action, but contrasts them with 'denials of responsibility', such as insanity, where the rational defect in that motive force is attributable to a mental defect in the agent him- or herself.

This classical view of excuses has a long heritage, and is enshrined in different forms in many of the world's criminal codes, both liberal and non-liberal; however, in this book, Jeremy Horder contends that it is now time to move beyond it. Horder develops a 'liberal' account of excuses, arguing that the 'classical' distinction between rational defects and 'denials of responsibility' is too sharp, and also that the classical view of excuses is too narrow.

He contends that it can be right to treat claims as excusatory even if they rely on a combination of elements of rational defect in the motive force behind the action, even if that defect is in part attributable to a mental deficiency in the agent him or herself ('diminished capacity'). Further, he argues that there can be a sound case for excuse even when people can give full rational assent to their actions, such as when they could not reasonably have been expected to do more than what they did to avoid committing wrongdoing ('due diligence'), or, more rarely, when their conscience understandably left them with no moral freedom to do other than commit the wrong ('demands-of-conscience').

Contents:
Table of cases
Introduction
1. The domain of excuses: A theoretical overview
2. An anatomy of excuses
3. Which theory of excuses?
4. Liberalism, partial excuses, and short-comers
5. Liberalism and the demands-of-conscience excuse
6. Excusing strict liability crime: a liberal account beyond the common law agenda
Bibliography
Index of authors
General Index