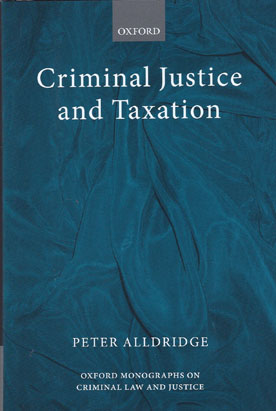 The fallout from the financial crisis of 2007-8, HSBC Suisse in 2015, and the Panama Papers in 2016 has generated calls for far more vigorous and punitive responses to tax evasion and greater international co-operation against mechanisms for giving anonymity to the ownership of property.

One mechanism to ensure compliance is the use of the criminal justice system. The announcement in 2013 by the then Director of Public Prosecutions, Keir Starmer, of a policy of increasing rates of prosecution for tax evasion raised squarely the issue of whether increased involvement of criminal law and criminal justice in tax evasion would be justifiable or not.

In this book, Peter Alldridge considers the development of the offences and the relationship between tax evasion offences and other criminal offences; the relevant rules of evidence; prosecution structures, decision-making processes, and alternatives to prosecution. Specific topics include offshore evasion and the relationship of tax evasion with other crimes and aspects of the criminal justice system. A topical and lively discussion of a heated debate.

Contents:
1: Introduction
2: Crimes of Evasion: History and Theory
3: Avoidance and Evasion
4: Criminal Evasion of Duties and Tax
5: Investigation and Prosecution Structures
6: Investigatory Powers
7: The Prosecution Decision
8: The International Element
9: Problems at the Intersections of Tax and Criminal Law
10: Should More Alleged Tax Evaders be Prosecuted?