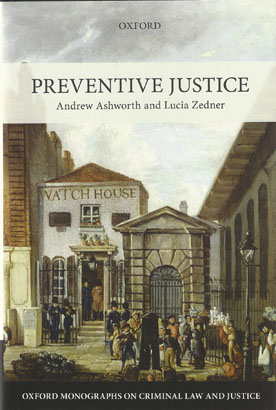 This book arises from a three-year study of Preventive Justice directed by Professor Andrew Ashworth and Professor Lucia Zedner at the University of Oxford.

The study seeks to develop an account of the principles and values that should guide and limit the state's use of preventive techniques that involve coercion against the individual. States today are increasingly using criminal law or criminal law-like tools to try to prevent or reduce the risk of anticipated future harm. Such measures include criminalizing conduct at an early stage in order to allow authorities to intervene; incapacitating suspected future wrongdoers; and imposing extended sentences or indefinate on past wrongdoers on the basis of their predicted future conduct - all in the name of public protection and security.

The chief justification for the state's use of coercion is protecting the public from harm. Although the rationales and justifications of state punishment have been explored extensively, the scope, limits and principles of preventive justice have attracted little doctrinal or conceptual analysis.

This book re-assesses the foundations for the range of coercive measures that states now take in the name of prevention and public protection, focussing particularly on coercive measures involving deprivation of liberty. It examines whether these measures are justified, whether they distort the proper boundaries between criminal and civil law, or whether they signal a larger change in the architecture of security. In so doing, it sets out to establish a framework for what we call 'Preventive Justice'.