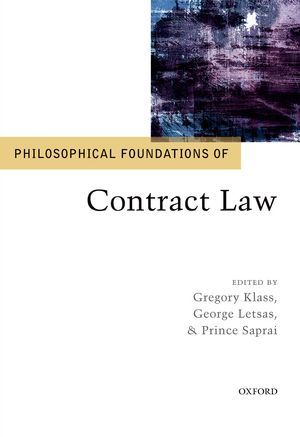 In recent years there has been a revival of interest in the philosophical study of contract law. In 1981 Charles Fried claimed that contract law is based on the philosophy of promise and this has generated what is today known as 'the contract and promise debate'. Cutting to the heart of contemporary discussions, this volume brings together leading philosophers, legal theorists, and contract lawyers to debate the philosophical foundations of this area of law.

Divided into two parts, the first explores general themes in the contract theory literature, including the philosophy of promising, the nature of contractual obligation, economic accounts of contract law, and the relationship between contract law and moral values such as personal autonomy and distributive justice. The second part uses these philosophical ideas to make progress in doctrinal debates, relating for example to contract interpretation, unfair terms, good faith, vitiating factors, and remedies. Together, the essays provide a picture of the current state of research in this revitalized area of law, and pave the way for future study and debate.

Contents:
Introduction
PART I: THEORETICAL APPROACHES
1. The Ambitions of Contract as Promise
2. Contract is not Promise - Contract is Consent
3. Is There a Reason to Keep a Promise?
4. Does a Promise Transfer a Right?
5. Promise, Contract, Personal Autonomy, and the Freedom to Change One's Mind
6. Promises, Agreements, and Contracts
7. Contract as Fact and as Reason
8. The Practice of Promise and Contract
9. Economic Foundations of Contract Law
10. Distributive Justice and Contract
PART II: DOCTRINAL ANALYSIS
11.
1. An Analytic Framework for Legal Evaluation of Boilerplate
12. Merchant Law in a Modern Economy
13. Good Faith as Contract's Core Value
14. The Nature of Vitiating Factors in Contract Law
15. Mitigation, Fairness and Contract Law
16. Remedies for Breach of Contract: One Principle or Two?
17. Efficient Breach