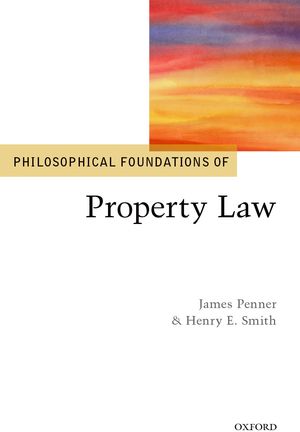 Property has long played a central role in political and moral philosophy. Philosophers dealing with property have tended to follow the consensus that property has no special content but is a protean construct - a mere placeholder for theories aimed at questions of distributive justice and efficiency.

Until recently there has been a relative absence of serious philosophical attention paid to the various doctrines that shape the actual law of property. If the philosophy of property is to be more attentive to concepts lying between broad considerations of political philosophy and distributive justice on the one hand and individual rules on the other, what in this broad space needs explaining, and how might we justify what we find?

The papers in this volume are a first step towards filling this gap in the philosophical analysis of private law. This is achieved here by revisiting the contributions of philosophers such as Hume, Locke, Kant, and Grotius and revealing how particular doctrines illuminate the way in which property law respects the equality and autonomy of its subjects.

Secondly, by exploring the central notions of possession, ownership, and title and finally by considering the very foundations of conceptualism in property.

Contents:
Introduction
1. To Bestow Stability upon Possession': Hume's Alternative to Locke
2. Productive Use in Acquisition, Accession, and Labour Theory
3. Property and Necessity
4. Private Property and Public Welfare
5. Average Reciprocity of Advantage
6. Some Strings Attached: The Morality of Proprietary Estoppel
7. Possession and Use
8. Possession and the Distractions of Philosophy
9. The Relativity of Title and Causa Possessionis
10. Defining Property Rights
11. On the Very Idea of Transmissible Rights
12. Psychologies of Property (and Why Property is not a Hawk-Dove Game)
13. Property and Disagreement
14. Emergent Property