The Law of Maritime Blockade: Past, Present, and Future 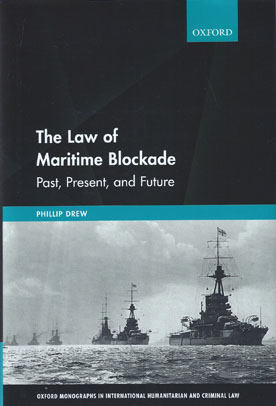 Although appearing to be a relatively benign method of warfare when viewed from a distance, a close examination of maritime blockade unveils a sinister character that can, in cases where countries are highly reliant on imports of foodstuffs to feed their populations, prove incredibly deadly, particularly for the young and elderly.

This book is unique in that it is the only contemporary book that is dedicated to the study of the law of maritime blockade in the context of modern humanitarian law.

Reviewing the development of blockade law over the past four centuries, The Law of Maritime Blockade provides a historical analysis of the law as it emerged, tracing its evolution through armed conflicts between 1684 and the present.

Referring to the starvation caused by the blockade of Germany during World War I and the humanitarian crisis caused by the sanctions regime against Iraq (1991-2003), this book demonstrates that blockade can have extremely deleterious effects for vulnerable civilian populations. In this context the current law of blockade is examined, and found to be deficient in terms of its protection for civilians.

Recognizing and advocating that blockade should remain as a valid and effective method of warfare, the book offers a template for a modern law of maritime blockade that incorporates many of the traditional aspects of the law, while reducing the possibilities that blockades can cause or exacerbate humanitarian disasters.