The Special Tribunal for Lebanon: Law and Practice 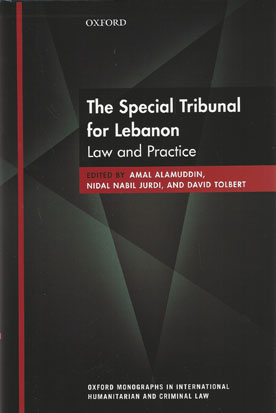 This book provides a full analytical overview of the establishment and functioning of the Special Tribunal for Lebanon, the newest and most controversial of the UN-sponsored international criminal courts. In 2005, Lebanese Prime Minister Rafic Hariri was assassinated in a huge blast that reverberated across Lebanon and the region.

The Tribunal was established with a mandate to try the perpetrators of the Hariri killing, as well as those responsible for other killings that are 'connected' to this core crime. Individuals associated with the Hezbollah group have been indicted to be tried in the court in The Hague-but in their absence as their locations are unknown. The Tribunal is the UN's first attempt at addressing terrorism in an international criminal court, and the first attempt to set up international trials following crimes committed in the Middle East region. The court's narrow mandate and unique procedures have led many to question what kind of precedent it will set in a volatile region.

This book looks at how the court was established, its foundational principles based on the Statute of the International Criminal Court and Lebanese domestic law, and the possible further development of its case law. It provides an authoritiative guide to the procedure of the Tribunal,the status of the Registry, the rights of suspects and accused, trials in absentia, and the regulation of the conduct of counsel, drawing on comparisons to other international courts.

The authors include those involved in setting up the court, prosecutors, defence counsel for the suspects, as well as judges and academic commentators who are experts on the issues covered in the book. They provide a probing insight into how the Tribunal came into being, its challenges, controversies, and its achievements to date.