Aggression, the Crime of Crimes: Individual Criminal Liability for the Unlawful Use of Force 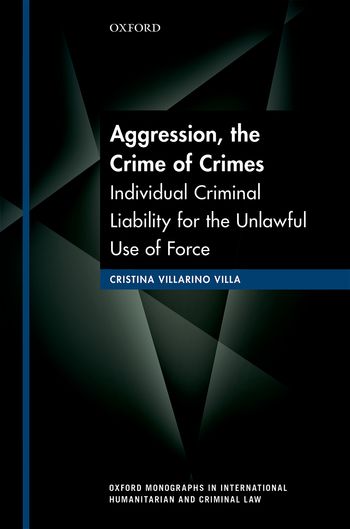 This book offers a comprehensive study of the content and scope of individual criminal liability for aggression under international law, from the end of World War I to the 2010 Review Conference which, after entry into force, will see aggression come within the ICC's jurisdiction in 2017. It argues that, even under the new substantive provisions of the Rome Statute, the rules governing individual criminal liability for aggression remain imprecise in important respects. It demonstrates that ultimately it will be for the international criminal judge to draw the line between the unlawful and the criminal, thereby acting as much as an adjudicator as a legislator

The book reviews the historical evolution of the criminalization of the use of force from the Treaty of Versailles to the London Conference of 1945, before undertaking a comparative analysis of the jurisprudence on crimes against peace from the Nuremberg and Tokyo Tribunals and allied occupations courts established under Control Council Law No. 10. It shows that the law as applied by post-war tribunals, generally viewed as authority for the customary content of the crime of aggression, was fragmentary and contradictory. It examines relevant legal developments after the establishment of the United Nations with a special focus on the negotiation process that culminated in the adoption of the "aggression amendments" by the Review Conference in Kampala, critically assessing its definition and content.

Finally, the book explores the role of domestic jurisdictions in the prosecution and trial of individuals for the unlawful use of force, setting out the legal and political obstacles that beset the application of the principle of complementarity to this crime.