Towards a Flexible Labour Market: Labour Legislation and Regulation since the 1990s 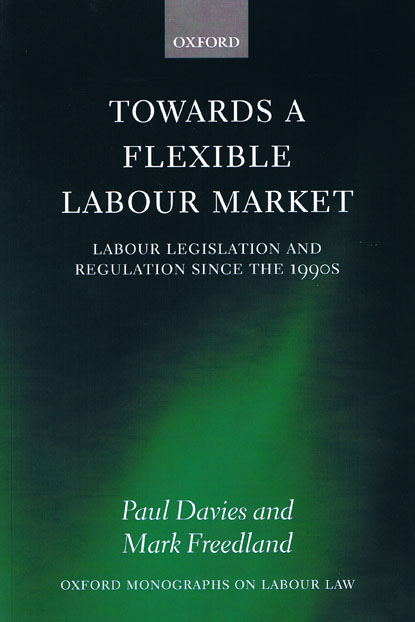 Taking as its starting point the authors' earlier work on Labour Legislation and Public Policy , this book provides a detailed account and critical analysis of British labour legislation and labour market regulation since the early 1990s. Referring back to the earlier history, and filling in the gaps in the early and mid-1990s, the work concentrates mainly on the legislation and policy measures in the employment sphere of the New Labour governments which have been in power since 1997, placing those developments in the context of the relevant aspects of European Community law.

The work argues for an understanding of this body of legislation and regulatory activity as being directed towards the realisation of a flexible labour market, and shows how this objective has been pursued in three intersecting areas, those of regulating personal or individual employment relations, regulating collective representation, and promoting work. It explores the methods of regulation which have been used, developing a taxonomy of regulation and a notion of 'light regulation' to characterise some recent legislative interventions. It considers how far the administration of Prime Minister Tony Blair has fulfilled its promises or claims of 'fairness at work', 'welfare to work' and 'success at work'. It is intended to be of interest to those concerned with the study of British and European labour or employment law, employee relations or human resource management, labour market economics, and contemporary politics.